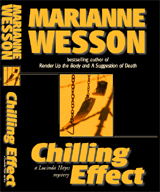 Chilling Effect was published in 2004.

Here are some of the reviews:

“From the beginning of her career as a novelist Marianne Wesson has been fearless, taking on topics that cause other writers to shy away. Chilling Effect is not only her most courageous book yet, it is also a wonderfully accomplished legal thriller. She deftly juggles life and death stakes, great characters, and serpentine legal issues into a tight, compelling tale of suspense. You won’t know whether to hurry toward the twisting ending, or slow down to savor the details.”

“Like Cinda Hayes when the fax first peels off the machine, we’re hooked from page one. Wesson fans expecting a fine dramatic stew of provocative social issues and the most powerful human drives won’t be disappointed. Chilling Effect is her most thoughtful and gripping thriller yet. ” —Baine P. Kerr, bestselling author of the courtroom dramas Harmful Intent and Wrongful Death

“I love the Lucinda Hayes stories—each tougher to put down than the last. Chilling Effect shows Wesson as both mystery writer and law professor. I couldn’t decide whether to take it to the beach or assign it to my first amendment class. Ultimately, I did both.” —Gene R. Nichol, Dean and Burton Craige Professor of Law, University of North Carolina

“More than a page-turner, Chilling Effect is a brain-sparker. You won’t be able to put it down, but once you’re done you’ll be thinking about its subject for a long time to come.” —Richard Weisberg, Floersheimer Professor of Constitutional Law, Yeshiva University

”Chilling Effect is a searing look at violent pornography, its victims, and the professionals (legal and otherwise) who live well off its profits. . . Everyone who cares about our children, our freedom, and the nature of our desires will enjoy this story, and will learn much from Wesson’s characters.” —Robin West, professor of law, Georgetown University